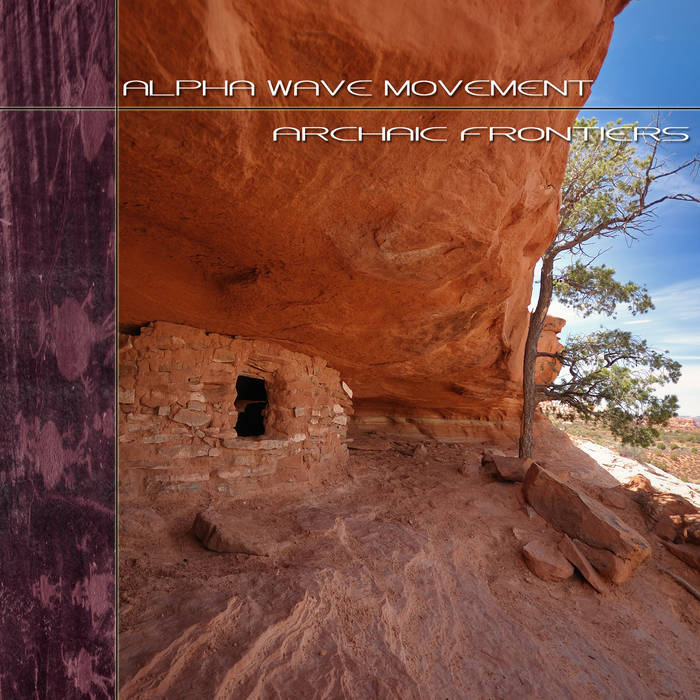 A further trek into the dominions of dusty red terrain and enigmatic crimson sunsets. Canyons and plateaus that echo a shamans motif of tribes lost in the mist of time & forgotten history. Music infused with improvisation and imagery channeled thru electronic medium and carved into form. Refractive tone clusters and their rhythmic counterparts vibrate thru the sediment and stone on the Archaic Frontiers.

How to describe the music of Alpha Wave Movement without making links with Steve Roach? Beautiful and extremely enticing, with a delicate ambient approach tinted with these lines of synth which tickle as much that they attack the passivity of soundscapes, the music of Gregory Kyryluk is strongly imprinted of this West Coast School such as defined by Steve Roach or still Robert Rich. Composed between 2009 and 2014, “Archaic Frontiers” is more down to earth and has only as cosmic touch some astral and starry winds. It's rather an album which drinks more of this mythical ambience where the tribal rhythms lay down their meditative hold in esoteric moods that make sing dusts of lands lived by the impressive sculptures that are arcs and monoliths of the American deserts. It's a very beautiful album filled by quiet moods which go between our ears like the most warm and musical winds which caress and mould within times these superb architecture of castle trapped in mountains made of sands.
And from the first tears of synth which meditate in the throat of a cave and its solitary seepages, "Cloud Sculptures & Desert Dust" drags us in the moods of Steve Roach's American deserts. And as aforesaid higher; we can speak about Alpha Wave Movement without thinking of Steve Roach's universe. The first moments of "Cloud Sculptures and Desert Dust" are of an absolute calmness. We are literally floating all over the lands of Desert Solitaire but with a more musical synth. The tears of synth intertwine in a fascinating sonic sexual intercourse, warming the esoteric spirits which quietly wake up to the sounds of delicate tom-toms. A sneaky line of sequences invites itself to the dance of the pensive spirits and makes glitter its keys which skip and snake in tones of melodious glasses. The rhythm makes itself at ease without being out of phase. He pounds with an aggressiveness which is contents by the embraces of a synth became more sorrowful with tears and groans which merge into other more musical lines, depicting aptly the fight of desert dusts against the strength of the passive winds. The astral waves of "Natural Light" are brighter. They float such as angelic sighs on a very meditative introduction. Except that "Natural Light" extricates itself from this morphic influence to offer a delicate rhythm which skips in a very harmonious way. Shamanic percussions energise this rhythmic impulse which becomes then more boosted. Panting beneath its tremulous rhythm, "Natural Light" becomes a kind of motionless running of which the passive flow accepts gladly the multiple caresses of a synth and of its so numerous approaches, as harmonious as ethereal. "Wunder" is my pearl in “Archaic Frontiers”. It's a wonderful ethereal melody with clear tints which sing as voices of angels on a smooth tribal rhythm. With its tears of synth which sing as much as they cry and its melody which makes ring its arpeggios in the crystal of the tears of solitary beings; "Wunder" is a kiss-curl track which is going to give you guaranteed shivers. An ambient piece of music as tribal as spiritual minded "Storyteller at the Mesa's Edge" makes the winds sing which blow their hollow chants throughout the obstacles of the huge desert stones. Dusts of sands enlighten and set ablaze. Their tones of carillons are sparkling into the dense aerial currents where the synth waves share their movements with some astral voices which float on a bed of soft manual percussions. In spite of its fragile membrane of night-time, "Quiet Realm" frees an innocent melodious carousel with a tinkled song which drags its solitude in some of silky layers of synths to the fragrances of solitary moods. Short and as much beautiful than "Wunder"! "Promised Lands", a little as "Natural Light" moreover, offers a finely jerky structure of rhythm with delicate quavering riffs which sigh on 3 dancing chords of which the recurrence forges a kind of upward spiritual trance that a beautiful ethereal voice confirms of her celestial singings. Percussions support the basis of the hypnotic rhythm while modifying its route by subtle knocks which accelerate or slow down the pace, so giving more visibility to a beautiful line of sequences and its harmonious cabrioles which skip in enveloping mystic mists. Like winds swirling against the rotations of ground turbulence, "Red Earth Reverie" ends “Archaic Frontiers” with strong winds which have difficulty in containing a slow but very present rhythm. The ambient canvas, and its winds which murmur as much than they embrace, takes back the main lines of the pensive rhythms which fed the ambient and tribal odes of Steve Roach and Kevin Braheny in 1987's Western Spaces.
Once again I let myself be caught, then charmed and even bewitched, in the delicious harmonious filets of a music that only the reason seems to define. Gregory Kyryluk, and this no matter his clothes, is undoubtedly one of the best-kept secrets of this latent American invasion which quietly extends beyond doors of perception. With its meditative ambiences shaken up by delicate rhythms, as harmonious as tribal and abstruse, “Archaic Frontiers” is a very beautiful album where Alpha Wave Movement draws his visions that we can easily feel and even see with a music which is to the service of imagination.
Sylvain Lupari (March 29th, 2014)
gutsofdarkness.com & synthsequences.blogspot.ca